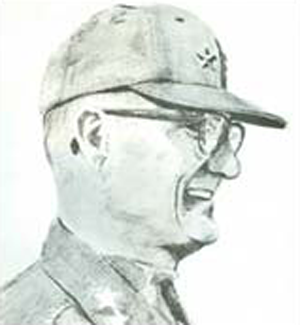 Edward L. Rowny was born April 3, 1917, in Baltimore, Maryland. His father was a Polish immigrant and his mother a first-generation Polish American. In 1933 he entered Johns Hopkins University. In his junior year, the Kosciusko Foundation sent him to study at the Jagiellonian University in Cracow. While there, he attended the 1936 Olympics in Berlin.

Alarmed by the goose-stepping Nazis, he saw that war was imminent. In 1937 he was graduated with a B.S. in engineering and was appointed second lieutenant in the U.S. Army Reserves. Now convinced that war was certain, he applied for West Point. In 1941 he earned a second B.S. degree and became a second lieutenant in the regular Army. Graduating just six months before Pearl Harbor, Rowny was in one of the first units to go overseas.

After a year in West Africa, Rowny returned to the United States to be a member of the newly formed 92nd Infantry Division. By the summer of 1944, Rowny had risen to the rank of Lt. Colonel and commanded a combat engineer battalion. The 92nd Infantry Division was deployed to Italy where it joined the offensive against the Germans along the winter line in the Alps. Combat casualties were so heavy that Rowny was transferred to the infantry. The division took part in the spring offensive and by VE Day had reached the Italian border. Rowny had earned two Silver Star medals for gallantry in action and two Legions of Merit for extraordinary service.

After a year in the Pentagon, Rowny went to Yale where he earned two masters degrees: one in engineering and one in international relations. In the fall of 1949, he was dispatched to Japan where he joined General Douglas MacArthur’s planning staff.

When South Korea was invaded on June 25, 1950, General MacArthur appointed Rowny as his official spokesman. For the next several months Rowny was one of the three planners of the Inchon invasion. Rowny, as the X Corp engineer, was promoted to the brevet (temporary) rank of Brigadier General even though his regular rank was that of Lieutenant Colonel.

He built the first bridge across the Han River and was part of X Corp in its advance to the Yalu River. When the Chinese surrounded U.S. forces in the vicinity of the Chosin Reservoir, Rowny dropped a bridge from the air to the beleaguered troops. This bridge crossed a gorge at the Reservoir and permitted the troops to escape. Rowny then planned and executed the evacuation from Hungnam.

From Tactical Innovations to Strategic Security

In 1951 Rowny commanded the 38th Infantry Regiment where he fought in the vicinity of Heartbreak Ridge and Bloody Ridge. Here, he earned a third Silver Star and another Legion of Merit.

In the summer of 1952, he became the head of a department at the Infantry School at Fort Benning, Georgia. From 1955 to 1958 he was Secretary of the General Staff to Generals Gruenther and NORSTAD, the commanders of U.S. Forces in NATO.

Rowny attended the National War College, where he was graduated in 1959. After a short stint in the Pentagon, Rowny was promoted to the rank of Brigadier General and assigned as the Assistant Division Commander of the 82nd Airborne Division. He simultaneously was the Director of tests for the Howze Board which studied the possibility of using armed helicopters in combat. After the successful completion of the test, the Army sent General Rowny to command ACTIV in Vietnam, a unit which studied how to shorten the war in Vietnam including the use of armed helicopters. The helicopters were so successful in fighting the Viet Cong that the Army decided to create an Air Mobile Division. Rowny was put in charge of organizing the Division which was subsequently deployed to Vietnam as the First Cavalry Division (Air Mobile).

From 1966 to 1968 he commanded the 24th Infantry Division in Europe. In 1971 he was promoted to the rank of Lt. General and was assigned to command the ICORP in Korea. From 1973 to 1979 he was the Joint Chiefs of Staff representative to the SALT II negotiations. He resigned from the Army in protest in June 1979 when President Carter signed the SALT I Treaty, which Rowny believed was fatally flawed.

From 1981 to 1985, during President Reagan’s first term, he became the chief negotiator for the Strategic Arms Reduction Talks (START). During President Reagan’s second term he was appointed Special Advisor to the President on Arms Control. As such, he briefed the chiefs of our allies. During this time he also briefed heads of the Warsaw Pact States and on four occasions John Paul II in the Vatican.

President Reagan awarded Rowny the Citizens Medal for being one of the “chief architects” for “Peace Through Strength.” Since retiring, Rowny has continued to act as an advisor on national security and homeland defense and has engaged in several philanthropic activities.